Now is the time to control codling moth in Tasmanian fruit trees. With a little knowledge and a few handy tips, you will be enjoying perfect grub-free fruit this summer.

Our horticulture courses focus on Integrated Pest Management systems for controlling pests and diseases. In a nut shell, it’s about using a combination of methods to control any one pest while causing minimal impact on other organisms in the growing environment.

The first step in controlling codling moth is to know your enemy! 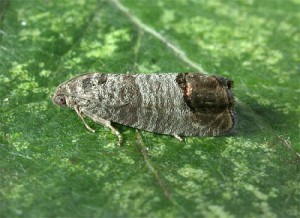 The codling moth, Cydia pomonella, is a pest species in apples, pears, quinces and occasionally stone fruit. The adult for of codling moth is a grey moth about 10mm long with a 20mm wing span. It has a copper coloured patch on each wing tip and brown banding along the upper surface of the wing. The hind wings of the moth are usually fringed.

The adult female codling moth lays approximately 60 whitish grey eggs, that are about the size of a pinhead, on the surface of the leaves when the average temperature is over 15 degrees in spring and early summer.

Codling moth eggs hatch after 10 days and the small caterpillars emerge to feed on the leaf surface and make their way to the fruit. They burrow into the fruit and head for the core. They will spend about three to five weeks inside the fruit feeding and putting on body mass until they are ready to emerge and find a place to pupate. By this time they are about 20mm long and yellow-red to white-pink in colour.

Codling moth caterpillars look for a place to form cocoons and pupate. They are searching for a crack, crevice, loose bark or tight space to form their cocoons. They may find these spaces on the tree, in pruned branches below the tree, on fences or tree supports or in the ground. The pupae are light brown in a white mesh cocoon around 20mm long.

Codling moth pupae emerge as moths after 18 to 30 days in summer. They then go on to repeat the cycle twice more in the season. The third and final generation of the season delays it’s emergence as adults, overwintering and emerging in the next spring to start the cycle again.

As the eggs hatch, the young larvae will feed on the leaf surface near the midrib, forming a gallery in the leaf.

Codling moth damage in apples is easy to spot. There is typically a small brown hole in the fruit with brown frass (caterpillar poo) exuding from it. Cutting the fruit in half will reveal a tunnel through to the core where the caterpillar is feeding.

Inspect your trees! Look for chewing of the leaves, young caterpillars and holes in young fruit. Remove any contaminated fruit and burn of feed to animals like chickens. Remove fallen fruit as well.

Remove any loose bark and dead leaf build up in the branches and forks of the trees where caterpillars may look for places to pupate.

Codling moth bands are a good cultural method of control. Take corrugated cardboard and wrap it around the trunk and large branches in bands. This will give the caterpillars a perfect place to pupate. Every 3 weeks, take off the bands and burn them. The most important time to do this is in spring, but the bands can be used year round.

A simple organic method of trapping coddling moths that has been used in Tasmanian orchards for decades, is a fence paling trap. To make this sort of trap, you screw together two 30cm lengths of fence paling with a 5mm gap in between. The codling moth larvae use the gap as a place to pupate. The traps are suspended in trees in the orchard and once every three weeks, they are removed and the pupating moth larvae are destroyed. 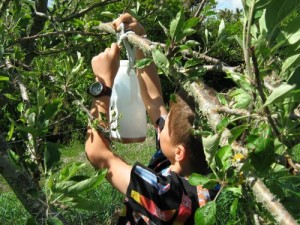 A simple codling moth trap made from a plastic bottle and a sweet liquid bait.
Img ref: http://www.providentliving.org.nz/how-to-make-a-codling-moth-trap/

There a variety of home made and commercial trapping stations available. They mostly use a sweet substance like molasses, fermented apple juice or diluted port as a bait to attract the adult moths, which get stuck in a liquid well or a sticky surface. A simple trap is a plastic milk bottle with a hole cut in the side. Fill the bottom 5cm with the molasses mixture and add a layer of vegetable oil. The oil will stop the moths from getting out and escaping. Suspend the trap from every third tree in the garden. Monitor the traps to get a good picture of how the population is increasing or decreasing in your garden.

Applying a horticultural glue in a band around the trunk of the tree will trap female adult moths as they enter the tree in spring to lay their eggs.

Entomologists use light traps to trap and count flying insects. The idea is that the moths are attracted to a light source at night. They fly in, hit a barrier and drop into a liquid well. A simple method for home gardeners is to suspend a light bulb or battery powered light with a piece of 30cm x 30cm Perspex on either side. Under the Perspex, sit a bowl or dish of water with a layer of vegetable oil floating on top. The moth flies in, hits the Perspex and drops into the liquid.

There are various sprays and treatments available for the control of codling moth adults and caterpillars.

Pyrethrum sprays will control adult moths but may be harmful to beneficial insects as well.

Eco Oil can be used to smother codling moth eggs.

Eco oils can be used to suffocate moth eggs when you first see them. Application rates vary but a consistent regimen of re-spraying may be necessary to control new eggs and to compensate for rain washing the oil off the surface of the leaves.

Dipel is a powdered mix that you add to water and spray on the leaves to control caterpillars. DIPEL contains BT (Bacillus thuringiensis) which is a bacteria found in the soil. When ingested by the caterpillars, they quickly stop feeding and die. Timing of BT application is important. Once the caterpillars are safely inside the fruit, it is too late. The benefit of BT is that it is a “safe” spray for humans and beneficial insects. There is no withholding period for fruit and vegetables treated with BT.

As mentioned earlier, an integrated approach to controlling codling moth is the best way to make sure your precious apple or pear crop is safe! Try a mixture of these techniques and see what works for you. Remember, just because you eradicate one season of moths in your garden, it doesn’t mean you wont be hit again next year. The moths will travel in from neighbouring trees and re-infect your own. Be vigilant and get them before they get your crop!